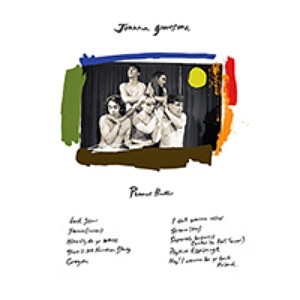 Once again aided and abetted by Hookworms‘ MJ, Peanut Butter takes all the flying tangents of Joanna Gruesome and hones them down to their very essence. It’s an onslaught of hooks from a band whose ramshackle nature is most of their charm, with debut Weird Sister winning last year’s Welsh Music Prize. Spurred on by a season of touring, the quintet (Alanna McArdle, Owen Williams, George Nicholls, Max Warren, and David Sanford) has brought back their no BS approach to live sets and applied it decisively.

With a feedback squeal, we’re off into the bracing “Last Year.” This isn’t the big, produced rock record by any stretch, more a canny distillation of virtues, and a cutting of anything deemed excess. Polish will get them so far, and the band’s feral side still surfaces, notably on “Honestly Do Yr Worst” and “I Don’t Wanna Relax.” “There Is No Function Stacy” and “Crayon”, conversely, showcase the band at its most singalong-able. For those who couldn’t get their paws on last winter’s split single with Perfect Pussy, “Psykick Espionage” shows up here, teaming with “Hey! I Wanna Be Yr Best Friend” to bring things to a breakneck close. Take a deep breath and spin it again.