ALBUM REVIEW: “Nothing To Do” by Bleeding Knees Club 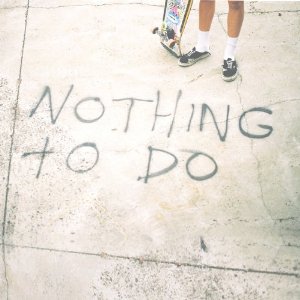 Bleeding Knees Club
Nothing To Do
[IAmSound Records]

Clocking in at exactly 26 minutes and 45 seconds, the Aussie dudes of Bleeding Knees Club waste no time getting to business on their debut album Nothing To Do. Riding the wave of lo-fi punk pop, the trio aimed to craft some tunes that can compete with the likes of Wavves and The Black Lips. However, while Wavves sing about weed and The Black Lips sing about being a menace to society, Bleeding Knees Club’s preferential topic is girls (see: “Teenage Girls” and “Beach Slut”). This is particularly evident on the longest track on the album, “Lipstick,” opening with a monologue that sounds like a punk rock version of something from Grease.

The band definitely has the potential to turn out some raucous party-starters. However, they are lacking in the attitude department, which is one of the most defining aspects of a punk band, pop or not. When listening to the album, most of the lyrics seem to fade away, leaving much to be desired. One detail that holds the album steady is the distinct female backing vocals. The wa-ooh’s and ahh’s peppered in on several tracks really compliment the grungey riffs and off-kilter singing. While these boys from Down Under have kicked off their career with a bang, it may take a little more experience to broaden their lyrical appeal.