“No Matter What EP” by Evan Ønly 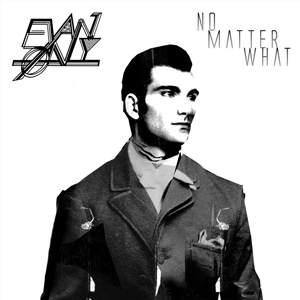 No Matter What finds Evan Brody, Family Portrait member and Underwater Peoples co-founder, revisiting the appropriation-as-rebellion spin on consumerist pop that bands like Heaven 17 and Scritti Politti championed in the early ‘80s. Plus, Brody’s debut solo EP fetishizes a good deal of related styles of that decade, from Pet Shop Boys’ larger-than-life synth-pop magnetism to an unorthodox mixture of industrial textures and bubblegum pop.

And as such, No Matter What makes its point successfully. Produced by Pains of Being Pure at Heart and Ice Choir’s Kurt Feldman, a man who definitely knows how to give the 1980s justice, the EP sounds like a believable artifact from that era. Then there’s the songwriting – all six cuts develop in a rewarding way, with lots of gripping choices when it comes to chords and melodies. Yet the music falls somewhat short when viewed outside of its niche. Take Brody’s voice, for instance: while his deep, jagged timbre nicely complements guest vocalist Alaina Riley’s singing in “Lifting Me Up,” his affectation in “Shadows” comes off as overdone, verging on parody. Ultimately, No Matter What is a collection of great songs that, as an album, struggle to overcome the novelty-factor of their concept.