“No Cities to Love” by Sleater-Kinney 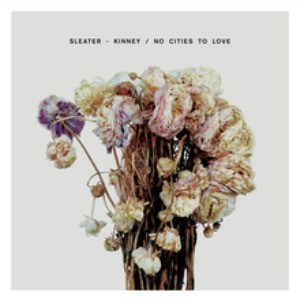 No Cities To Love marks the return of Sleater-Kinney, the Portland trio spawned from the ashes of Riot Grrrl to go forth and conquer. To anyone who bore witness to their live show, especially their emotional victory lap in 2006 when they stepped out on hiatus, Sleater-Kinney were the best band in the country, no question marks or gender qualifications needed. Never on the Lilith Fair trip, Sleater-Kinney was pure “search and destroy.” Last fall Sub Pop released a box set of their life’s work, and amidst the bounty of the package, one’s eye immediately went to a white label 45 cryptically inscribed “01/20/15.” Turns out it contained “Bury Our Friends”, their first new music in a decade, and a mission statement on wax.

In just over half an hour, Corin Tucker, Carrie Brownstein, and Janet Weiss burn through ten tracks at Dig Me Out energy levels, with the jaundiced social eye of One Beat. If there’s a running theme, it’s the concept of “the price we pay” (economically, personally, or politically), and the compromises that adults face, bookended by the opening and closing tracks, “Price Tag” and “Fade.” Sleater-Kinney, for better or worse, never worked in half measures, and somehow we knew that this would be the one band we could count on to resist the easy lure of nostalgia.