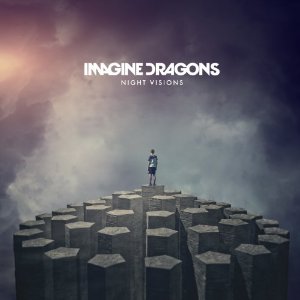 Imagine Dragons are everywhere. “It’s Time” has been in movie trailers, will be covered on Glee, and as it charted on Billboard, has had almost constant radio play. This is a shame because it’s a great song-catchy chorus, just enough introspection to show deep thought, and a fantastic intro. It’s also, along with 3 other songs from the EP Continued Silence, on the debut album Night Visions. Not sure how debut this is since 33% of this album is already owned by a goodly percentage of the population, us included. “Radioactive” showcases the band’s ability to merge different genres, as does “On Top of the World.” “Underdog” is an electro-reggae uptempo song guaranteed to make you sing and dance. The remainder of the album is a radio ready mix of homogeneous pop that flows so smoothly, you aren’t sure they’re different songs.

Las Vegas’ own Dan Reynolds, D Wayne Sermon, Ben McKee, and Daniel Platzman are very coy about what their band name means. Reynolds says, “And our name is an anagram of that phrase [we agreed on]. It’s the only thing we like to keep to ourselves.” Ok boys, that’s certainly going to introduce anagrams to a whole new generation, which we say is fantastic. Keep the phrase to yourselves and keep on experimenting with the music. Hopefully the next batch will have a whole album of memorable songs we know you are capable of.