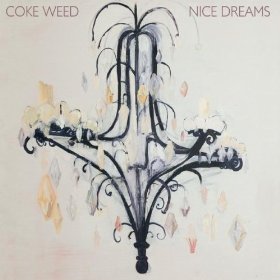 It’s always a pleasure to come across a band like Coke Weed, who lay out their influences on our ears without pretense or bravado. Their second, self-released album Nice Dreams is equally as unaffected; producer Nick Stumpf (former frontman of French Kicks) and Coke Weed worked together in a barn in
Maine, recording their album live in a matter of a week and a half. Yes, live – no overdubs to correct imperfect notes or misplayed songs. Nice Dreams combines lush, dreamy doubled vocals from Nina D. and Milan McAlvey (also on guitar) with a folk-to-rock 1960s transition sound from bandmates Caleb Davis (guitar), Zach Soares (bass) and Peter Cuffari (drums). The result is a solid album that takes us on long, brooding walks through the band’s surrealist stream of consciousness.

Coke Weed’s sound is reminiscent of early Velvet Underground, with its brooding tempo, jangly guitars and doubled vocals that inspired the founders of alternative music as we know it today. There are touches of country twang in songs like “Jimmy” and “Kid”. The band’s single “Magpie” is especially haunting, as Nina D. sings of being torn between the city and country; she’s feeling like a bird left “twisting in the wind”. Coke Weed is currently touring the Northeast and we hope they’ll consider a trip to the West Coast.