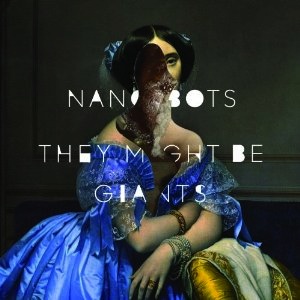 With the 2011 album Join Us, their first serious collection of songs after several years of recording children’s music almost exclusively, They Might Be Giants embarked on a road back toward indie rock relevance. Like many other former alt-gods in the recent years, on that album the duo returned to the quirky post-punk comedy sound that made them stand out so charmingly in the late ’80s. This year’s follow-up, Nanobots, is a continuation of that return.

What it really means is that They Might Be Giants are truly themselves on this record: juxtaposing eclectic, ADHD pop tunes with lyricsmanship that resembles the school cafeteria exchanges and dorky impersonations by Freaks and Geeks’ Sam, Neil, and Bill. The songs range from abstract pun-bombs (“You’re On Fire”) and military satire (“Black Ops”) to wide-eyed tributes to nerd icons (“Tesla”). At the same time, it’s hard to deny them musical appeal – “Call You Mom,” for instance, is catchy in the 1960s single sense of the word. In 2013, TMBG are still niche artists, but they haven’t been this good at what they do in years.