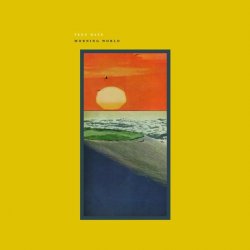 Marking a long-awaited return to his ambient-string arrangements is master of summery vibes, Teen Daze. More than twenty months have passed since 2013’s Glacier hit shelves and the ears of chillwave enthusiasts, but Jamison and his moniker has had a busy year of non-recording—taking to the Swiss Alps for seven weeks to study philosophy, picking up thrift-store books for inspiration. Morning World was recorded in just ten days.

The result is a rich tapestry of organically matured sounds, so varying over the record’s eleven tracks that it’s difficult to pinpoint a distinct Teen Daze “sound” these days. Album opener, “Valley of Gardens,” an eccentrically jolting collection of three movements, opens with strings, and soars over the frigid caps of Glacier’s “Ice on the Windowsill”. The rhythm sections on each Morning World song are molten and fleeting at the same time, and dripping down the periphery are warped guitars that seem more new wave that its “chiller” counterpart. The album itself is so varying that it doesn’t quite know what to call itself—“dreampop” or “post-chill,” what-have-you.

Key to this new sound is the departure Teen Daze took from his bedroom recordings of years past: using physical instrumentation over digital, presenting his delicate voice unaccompanied by synths. He’s still in a childlike daydream: wandering that line between viscerally confessional (yet tame) lyrics on “It Starts At the Water”, (“we can live forever / all you have to do is give yourself”) and the wooly guitars found on “Pink.” Jamison has a newfound of exploring: creating Tame Impala-esque psychedelic grooves on “You Said,” and Pink Floyd echo in the album’s second single, “Along.” Morning World seems likely to capture the hearts of new Teen Daze fans, and breath life into the hearts of old ones.