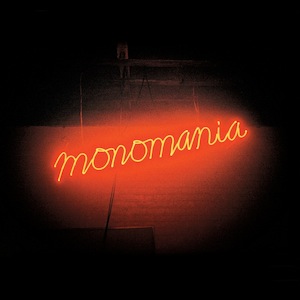 “Connie Lungpin” is the name Deerhunter front man Bradford Cox called himself before a Jimmy Fallon appearance a few months ago. Wearing a terrible black wig and a bandaged hand (in honor of his father who lost his fingertips in a recent table saw accident). The band debuted “Monomania,” the title track of their new record, and new persona. Loud and messy, it would be a sign of things to come.

After the brilliant Microcastle and the sublimely balanced Halycon Digigest, Deerhunter’s fifth album is confrontational and rowdy. “Neon Junkyard” starts the album with spooky guitar chords and Bradford growling through filters. Feedback squeals and a record plays in reverse.

The band has always had the ability to balance experimental punk rock sensibilities with ’60s influenced pop psychedelia. Here the harmonies are few and far between. Most of the songs would sound great on a dive bar jukebox. It’s challenging, and even fans that have followed the band through their different sounds over the years will be surprised that they can make bad ass country record, “Pensecola.” It’s confident and brash, and wholly embraces a southern garage rock sound which is befitting of the band’s Atlanta roots. Cox sings “I came from the Delta down to the plains. When I got back home there was nothing I’d arranged. The woman that I love done took another man. Well nothing ever ends up quite like you planned. Whoo!” Even without bassist Josh Fauver, the band sounds awesome in its new setting. It’s classic Americana rock ‘n roll, in both movement and theme. “Nitebike” is the only moment where the band breaks the “Connie Lungpin” leather jacket motorcycle persona. Here Cox reverts to a persona familiar to his Atlas Sound fans. He’s still growling, but he’s cautious again. Without his mates backing him up and giving him confidence, Cox is suddenly vulnerable with only his acoustic guitar. Pensive and feeling isolated, it’s a familiar theme for him, and the lone connection to his past work in both Deerhunter, and Atlas Sound.

“Punk (LA Vie Anterieure)” finishes the album, and attempts to reconcile different identities for both Cox and the band “For a month I was punk, for a week I was weak, help me find some release.” In the past, a new Deerhunter phase was to be treated with seriousness and reverance but with Monomania, the guys are changing again, and this time they’re having fun with it.