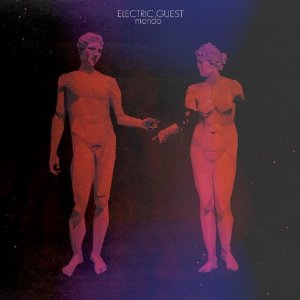 Los Angeles-based Electric Guest‘s debut album Mondo, is full of catchy, toe tapping, hip shaking, R&B/soul-inspired hip-hop music. Electric Guest is made up of Asa Taccone (singer) and Matthew “Cornbread” Compton (drums) — both of which have a long and impressive resume working with several other musicians. Mr. Compton was part of indie acts Denali and Engine Down, he also recorded drums on Cursive‘s “Mama, I’m Swollen.”

Upon repeated listens of the album, it becomes simple to point out that the band perfectly creates two different type of sounds. One is a bit of a throwback to ’60s soul-inspired pop rock, as evident in “This Head I Hold” and “Waves.” The other is an interesting blend of R&B/pop amidst hip-hop-like beats in the manner of opening track “Holes” and “American Daydream.” The latter has an entertaining music video that was released earlier this year. The rest of the tracks effortlessly blend both styles to create a sound they can call their own. It didn’t hurt to have Danger Mouse as a good friend, who was willing to help produce the record. The album as a whole shouldn’t struggle to gain attention considering it has a little something for everyone.