“Modern Vampires Of The City” by Vampire Weekend 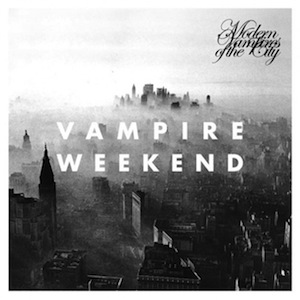 Was it possible not to like Vampire Weekend‘s self titled debut? It was smart, flawlessly self-produced, and incredibly thoughtful. The guys met as students while attending Columbia, and the Ivy League image that they projected at first was a little funny, but it was hardly enough to discredit the music. The sophomore effort Contra was a solid follow up, but lacked some of the magic of the first record.

To shake things up, the guys brought in Ariel Rechstaid, who has produced songs from Cass McCombs to Usher, and is most known for “Hey There Delilah,” by The Plain White T’s. Was the band selling out? For hard core fans, there was a bit of panic, using an outsider seemed risky. Any fear of the band’s integrity being compromised is quickly squashed. “Obvious Bicycle” starts the record, and the listener is immediately aware of a dark tone hovering, “You oughta spare your face the razor, cause no one’s going to spend the time for you.” It sounds incredibly pretty, but its also hopeless and melancholy (is that Panda Bear singing in the background?). “Unbelievers” follows and the pace picks up to familiar territory for fans of the band, but it sounds bigger and more mature than anything the guys have done in the past. While it’s a dance song, there’s still sadness — “The world is a cold place to be. Who’s gonna save a little grace for me? Is this fate that half of the world has planned for me? I know I love you. You love the sea. But what holy water contains a little drop for me?” The synth here is fresh, modern, and the harmonies are great.

It sounds heavy and it is, but it’s presented in the sweetest way possible. The title of the record is partially obvious (a picture of a fog swept Manhattan graces the cover), and the Vampires seem to be the forlorn characters in the songs. It’s destined to be a classic along with their debut, and will be an anthem record for the summer.