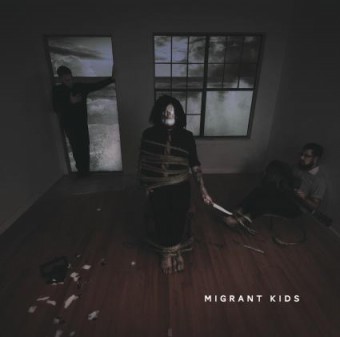 “Using the elements of water, electricity, vibration, and pulse, this three-piece from Austin, Texas, create an ethereal psychedelic experience of electronic storms, atmospheric voices, and rhythms that unfold and explode in otherworldly scenes.” Yep, that is a direct quote from Migrant Kids’ website. John Zakoor, Miguel Ojeda, and Brian O’Flynn are David Lynch and method acting fans, so they actually mean that. Funded via Kickstarter, this self-released debut album is a concept album – the ending of a relationship.

First thought upon hearing this was, “oh goodie, ’cause we need another one of those.” However, this is a concept album in all the best ways. Think Pink Floyd, Sufjan Stevens (whom the band name checks on “Blanco”), or Queensryche. Beautiful harmonies flow into clamoring rock guitar riffs on “Lucktear.” “Canvas Of Me” wins the award for the creepiest/most deep thought refrain we’ve heard this quarter: “I’ve drawn myself out of your blood/you can’t stop this from drying.” “Hielo” and “Salida” are instrumental pieces, proving the trio is as talented with arranging their music as they are writing the lyrics. We’re looking forward to the release of their futuristic apocalypse concept album.