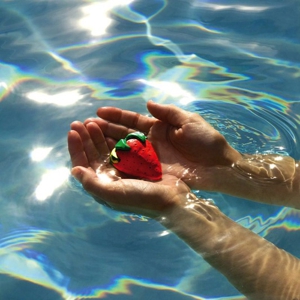 The first time I saw this band live a few months ago, a tall man sporting a David Niven mustache strolled over to his keyboard wearing a holiday cat sweater. I thought then that this was going to be the coolest opening band ever or I was headed back to the bar for another Fat Tire; that kind of sweater never belongs to mediocrity. Lured in by the catchy hooks and snarky lyrics sung in Charlie Brand’s sweet adolescent voice, I never got that second Fat Tire. There were several songs off their third album Mia Pharaoh in the set and I resolved to look up everything I could find the next day via the power of Google.

I found that Charlie Brand, Rick Schier, and Algernon Quashie were the guys making this whimsical bubblegum music happiness. I was saddened to learn that somehow I missed them a couple of years ago at the (now defunct and ahead of its time) Monolith Festival, but saw that a new album was to be released soon! It would be mine, I vowed, and soon it was. In the biography information that came with the music, I learned that the song “Afternoons With David Hockney” was inspired by that David Hockney, the pop art pioneer known for his post-Cubist photo collages and striking paintings of the mundane. This explains why saxophones can be heard sneaking in the background of an otherwise guitar-centric island pop gem, advising us to “not let the money make you lazy/as lazy is just not you.”

The whole album (10 new tunes) is comprised of odd bits and pieces, harmonized into one smooth amalgamation. “Boomerang” sounds like a lost B-side to Pet Sounds, until you get a good listen to the snappy lyrics, a stalker song for the Nick and Norah generation. This album is certainly more cohesive in its mighty pop art than the previous two; the reason being, as Brand explains: “Halfway through making Mia Pharaoh, I fell in love with pop all over again and was strictly listening to Top 40 music. Instead of studying Simon & Garfunkel drum tones, I was figuring out what samples The Dream and Kanye used, or trying to write a song that Katy Perry or Rihanna could sing; a real outsider pop record.”

Well, I for one can totally see Katy Perry singing “Sex on the Regular,” an ’80s vibe fest in her latest latex costume crooning, “come over if you want it and jump me again.” And we can all hear Kanye pumping out “she don’t believe in god, only believes in me” from “Female Doctor.” On “Easy As All That,” it is refreshing to hear a guy start a love song with “sometimes you act like a fool, yeah you do” and then have the angsty thoughts we have all had: “should I tell her that I love her, though I’m not supposed to/should I tell her everything and lay it all out?” Refreshing, open, and, yes damn it, way cute, Mia Pharaoh proves for Miniature Tigers that third time is most definitively the charm.