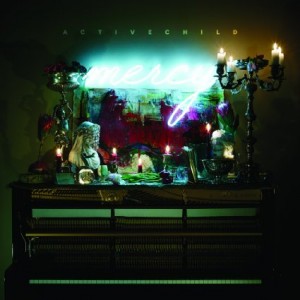 Four years later, Pat Grossi – aka Active Child – has finally gotten around to releasing his second full length album, Mercy. Fans of the harp chamber synth pop will find plenty to swoon over amongst the 10 tracks. Hell, people who have only heard of him in connection to Ellie Goulding should be swooning over this.

“Darling” is the most hauntingly beautiful ode to love lost you will hear for years; Grossi’s flawless choral voice shines over lyrics honest enough to have your heart ache in sympathy. The title track “Mercy” brings the slow funk and synth of an 80’s R&B ballad, but in such a crystalline way that it seems organic and fresh. Which makes sense considering this album was recorded in Brooklyn and produced with Van Rivers (Blonde Redhead, Fever Ray) so as to make a collection of love – and not so much in love – songs. Grossi says, “This album more than previous releases feels like more of a collaboration between the producer and I. His fingerprints are all over these songs and he really pushed me vocally, more than anyone has before.”

This change-up in style, with less reverb in Grossi’s voice and more ghostly harmonies, really shines with the gorgeous piano and harp arrangements. The synth doesn’t feel distracting, rather somehow an necessary element that demands to be heard and loved. Vulnerability be damned – we don’t want to wait another four years to get something else this good.