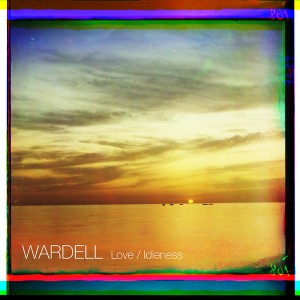 Love / Idleness is about the surprises and unexpected turns. What at first feels like a She & Him homage (quirky, adorable, and dorky wrapped into soft pleasant female vocals with the music virtuoso male backing musician) is constantly subverted by twists and turns in each song. Wardell engage with the music genres that they are paying homage to (1950’s rock, a little bit of R&B, and big rock and roll sound with catchy melodies like The Cars), and reinvent them.

The titular track is a smooth tune that emphasizes Sasha Spielberg’s vocal range. She’s able to use her falsetto highs to provide the intrigue and love, and then bring out the deeper notes to create something sexy. The song builds to an electric guitar effected to sound like a synthesizer, and an up-tempo Sasha nostalgically imploring her unseen lover. This turn is away from the expected and safe.

Love / Idleness provides plenty of songs to showcase the vocal range. Her voice is necessary to the song’s construction. This isn’t the talentless girl standing in front of her band as candy, but an instrument being exploited to create the sound. The song “Waters” is the sound Haim was critically lauded for, which only complements the versatility of this album. It’s immediately followed by American South-tinged ballad “Virginia, Wait.” “Heaven’s Keeper” and “Opossum,” which end the album, are the standouts. “Heaven’s Keeper” builds succesfully into Sasha playing falsetto chorus over a steady beat, spitting out emotionally charged words that entrance the listener.

With each successive listen, the album gets more enjoyable. The elements that stand out: the guitar solo on “Love / Idleness” that elevates it over any indie of the moment R&B-influenced song; the wild hooting on “Heaven’s Keeper;” and the perfectly balanced use of cute and love struck on “Opossum” which explodes in Sasha singing “Our love was buried in the wake/Hello my friend” without missing a beat. Love / Idleness moves from deep love to friendly conversation, and the listener nods along knowing it was just the right time.