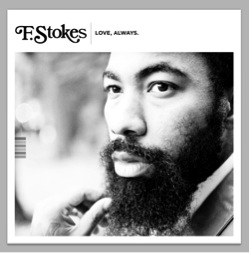 On spoken-word opener “Aspire & Inspire,” Stokes tells of characters facing all-too-common struggles. Instead of succumbing, however, they find that last bit of inner strength to work for something better, and these themes continue. His bouncy flow on “Blessings,” and the radio-ready “Beauty and the Beast,” serves him well.

In the catchy, organ-inflected closer, “My Simple,” he praises his unnamed “small town in the USA.” Stokes calls his girl and parents “simple,” and purports to have a good job “at the Wal-Mart,” which seems to belie the sophistication he shows earlier on. “Is he being ironic?” you’ll wonder, but his heartfelt sincerity pushes through. His pride comes not from rap’s typical materialism, but from family, community, and he’s creating an anthem for anyone who’s found the same. How many modern rappers can make you nod your head while pondering life’s simple truths? Here, F.Stokes does just that.