“Loom” by Fear Of Men 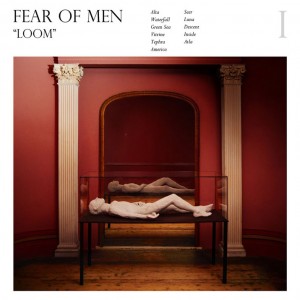 Brighton’s Fear Of Men first came to the attention of the Nest at last year’s FYF Fest in LA, filling an early afternoon slot with scrappy guitar pop. An eyebrow raised, we filed it away for future reference. Now comes Loom, their official debut, a stunningly self-assured gem of surface-level earworms with a lot going on underneath. The band was spawned from student film soundtracks of Jess Weiss, which led her to collaborate with Daniel Falvey. Loom is an epic widescreen production that’s all the more impressive for being produced by the band with an assist from the house engineer.

Kanine Records took a flyer on the band, releasing a compilation of singles last year, and their faith is repaid to the hilt here. Bookended by “Alta” and “Atla,” seeming fragments in the scheme of the record, but their importance is unveiled with subsequent listens. The beating heart of the record sits in the middle with the luscious “Vitrine” showing off their pop instincts and “Tephra” illustrating the production depth with chugging horns creating a riptide. “America” is the key track: an a capella opening unfurling into a luminous ride, that midway through erupts into an unexpected but perfectly placed guitar solo. Extra bonus is the paranoia inducing shredded speaker effect. Don’t let the glossy surface fool you, there’s some dark stuff going on underneath, with “Seer’s” line: “You make no sense with my hands around your neck” forcing one to listen much closer. Fear Of Men will be touring guests for The Pains Of Being Pure At Heart this Spring, giving one a compelling reason to show up early.