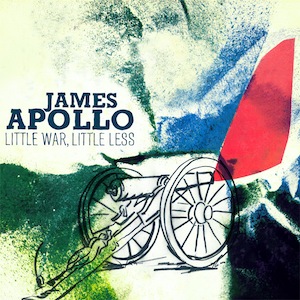 Many people claim to be wanderers. These days, there seems to be a fascination with the “Americana Dream,” that is, to be a nomad roaming the country in a bus. But what really gives someone the title of “wanderer?”

We would say that fleeing to the other side of the country without telling anyone and living in the Utah Canyons for a few months creating an album certainly counts.

James Apollo, originally from Arkansas, then New York, and currently living in Seattle (at least for a month or two), has created a collection of songs that resonates with the loneliness only a nomad can feel.

Produced by well-known folk singer/songwriter, Damien Jurado, Apollo’s sophomore album has its fair share of both hits and misses. Opener “Blessed or Bust” is a promising start, beginning with a more upbeat version of a Beirut melody. Instrumentally and vocally rich, the song carries itself through the 3:12 time. The next track “Two by Two” offers up an enjoyable western vibe.

During the middle of the album, however, things begin to go downhill. “You and Me and Him” begins with an overwrought melody, complete with overly repetitive piano and trumpet sounds, which never cease to remain up front-and-center. “A Suckers Spark” is a melodramatic ballad with a tempo the speed of molasses.

But then, a light appears in the dark with “Big Dipper,” a track with a tasteful amount of brass, and a strong display of Apollo’s rugged vocals. The closer, “It’s the Days” which seems to be a recap of his contemplative time spent in the desert, features soft female vocals and clever lyrics. The standout track on the album is hidden until the end.

Overall, Little War, Little Less is a little disjointed and extremely introspective, much like Apollo’s own nomadic existence. We’re thinking that before he writes his next album, he should call somewhere home for a while.