ALBUM REVIEW: “Lasers Over Lovers” by The Frail 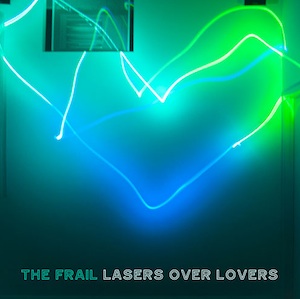 Already making a prominent name for themselves, The Frail is keeping with it with their latest EP, Lasers Over Lovers. In the six short tracks, the ep runs the course much like that of a quick Six Week SF Romp, (ya know the thing we as San Franciscans do so often instead of going long term with somebody.) Starting off sweet with opening track “Oh Shana” is the instant hook easily compared to that of a crush on that person you see every day at Bi-Rite. Quick saccharine synths drive the ep mixed with Daniel Lannon’s molasses thick vocals provide an equal amount of intensity and effervescence.

Keeping in suit with the SF Six Week Romp, the EP leads into “Sex is what Sells” a brash electro track easily juxtaposed with spontaneous sweaty, dark alley shenanigans. Lead single, “Heartbeats” which was previously released on the Friends of Tricycle Records compilation, is the most substantial song of the six, with prolific lyrics over a danceable beat.

Like a love affair between The Cure and LCD Soundsystem, The Frail keeps improving their sound and undoubtedly will be seeking further success in the near future. Lasers Over Lovers, is exactly the mentality of the average too busy, too hip, too important for a relationship San Francisco resident who would much rather dance than be in love.