“Kicking Every Day” by All Dogs 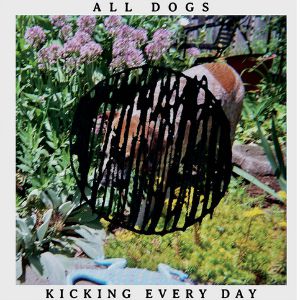 For all the great music released last year, the most played item in this corner of The Nest was a 45 by Columbus, Ohio’s All Dogs humbly entitled 7″. In just four songs they created an entire world, and on their full-length debut Kicking Every Day, they deliver on every promise and then some. Guitarist and songwriter Maryn Jones has had a hectic year, wrapping up a forthcoming record with Saintseneca and dropping her own solo album under the moniker of Yowler. It’s with All Dogs that her gifts are most fully realized.

On 7″, the poles are churning rocker “Buddy” and goose bump inducing anthem “Say.” On Kicking Every Day those positions are filled by the rousing “That Kind Of Girl” and the album’s high point “Skin,” which already has position of pride on my year-end mix tape. New wrinkles in the fabric occur with the band embracing jangle for “Sunday Morning,” and essaying slow burn rockers on “Black Hole” and “Leading Me Back To You.” Closing out the affair is an acoustic epilogue/hymnal, “The Garden.” The sequencing is ace and producer Kyle Gilbride adds his special love to the mix, but it’s the raw emotional connection that will keep you coming back for more.