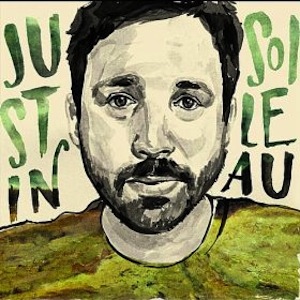 Texas native Justin Soileau (pronounced “swallow”) found his way to the breezy coast of Orange County the same as many that have come before him…rehab. Now clean and sober, he is creating music that ebbs and flows sweetly. It is easy to hear the influences of artists that Soileau is an admitted fan of: Iron & Wine, Sufjan Stephens, and Bright Eyes. The deceptively simple lyrics, softly voiced, and the great instrument arranging (trumpet! steel guitar!) definitely echo other artists in the folk/alt/country/indie/pop groupings. Bonus! “The Forbidden Love Waltz” is an actual waltz. Yes, I am of the opinion that there needs to be more heartbreaking (it’s about unrequited love) waltzes in our music library.

The first single “I’d Never Lie to You” is a zippy tune telling you an addict’s love story, bursting with guitar and trumpet. Vince Walker is behind the trumpet goodness and Holly Pulliam lending her voice in harmony. “All That I Know” is a gorgeous, insightful song telling of lost opportunities, of the chance to grow and learn.

This is Soileau’s debut album, and it is very much an album to unwind to, get lost in the stories he is telling, and possibly have some deep thoughts about life.