“Is This Hyperreal?” by Atari Teenage Riot 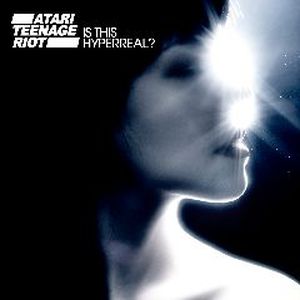 Get ready to party with a purpose. Atari Teenage Riot’s latest album Is This Hyperreal? is In-Your-Face, Conscious Hardcore Electronica.

I want to hear this in a club with nonstop strobes and a thousand sweaty dancing bodies convulsing with the beats. I want the bass to rattle my innards as I flail my arms and legs to this music. This album makes me want to dance.

With driving 8-bit drum, bass and buzzing electronic guitar sounds, the music is not unlike what you’d expect to hear pumping through an electronic club. Every song is a tsunami of sound. The lyrics are mostly conveyed by shouts in a punk style declarative chant. It’s like Chemical Brothers meets Prodigy with the activist sensibilities of Zion I and Massive Attack. The group is made up of Alec Empire, Nic Endo, and DJ CX KIDTRONiK.

Is This Hyperreal?, released by Dim Mak Records, is nothing short of bold. Topics covered include: racism in a post-Obama America, the importance of whistle-blowers and Wikileaks, information control and the Internet, and capitalism. They don’t employ obscuring innuendo and always mean what they say, in fact many of the lyrics are just declarations meant to incite a thought revolution. Atari Teenage Riot asks the listener to question authority, law, and the government. ATR wants us to wonder who supplies the information we consume.

“Are you ready to fight the power? Come on!… Are you ready to testify?” shouts Alec, Nic and Kidtronik, in the third track, “Black Flags.” And then Alec Empire paraphrases Salon.com’s political blogger Glenn Greenwald with, “There’s a unified axis of government and corporate power, lawless and unrestrained. That’s what we should talk about.”

DO NOT dismiss this band with the prejudice that our conditioned mainstream consciousness reserves for so called conspiracy theorists and extremists.