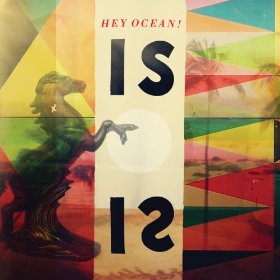 Pop music is a fickle beast. Vancouver’s Hey Ocean! is in a reluctant, erratic brawl with
it. Only the three minute single is winning.

Thematically, Hey Ocean! is hard to pin. Is (released on Nettwerk Records) is all pop
reverent, but “New Love” with its underlying modern country hints and Swift-ian lyrics,
the bossa nods on “Make a New Dance Up,” and the beachy rock restyling of The
Ronettes’ “Be My Baby” leave Hey Ocean! scattered haphazardly across the vast pop
spectrum. Subgenre-defying might have been the intention, but the result is an album that at times falters with disjointed and clumsy transitions.

But, there are exceptional moments. In a catalogue of ditties and ballads, “Maps” is
honest, stirring, and novel. Ashleigh Ball’s delicate phrasing has a spectral presence—
it’s a phantom melody avoiding being crushed by the whirring haze surrounding it. And,
Is’ intro track, “If I Were a Ship,” is more evocative in the first 30 seconds than most
of the album—because it doesn’t try to be. The most successful places on this album are
ultimately the simplest. Is might grab for a series of singles, but not as a cohesive work.