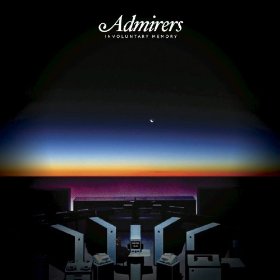 Like Trent Reznor on sugar-coated uppers, Mike James pretty much runs the show with Admirers, his dance-pop project that veers from Duran Duran, past Talking Heads and Genesis, and does a few doughnuts around the Passion Pit parking lot. He and Jason Milton have buffed their twilight reveries to a glossy sheen on Involuntary Memory, but peel away the burnished exterior and these songs yield few standout effects or bits of instrumentation that elicit more than mild intrigue. It’s a shame, since Admirers’ obvious calling is an edgy arena sound that lies far beyond the middle of the road — past the rumble strip, even.

“High Street” gets the closest with a beat that lopes under a wash of synths that glide across a sanguine chorus. On the whole, though, James’ songwriting feels drab; with just a little more sterility, “Rebel Love” and a few others could soundtrack an ad for Windows 8. And on the New Order-gospel choir collision of “Rhythm Mirages,” his vocal delivery lacks the sincerity and soul that prevents any and all New Wave from curdling into the worst kind of cheese.