“If I Should Go Before You” by City and Colour 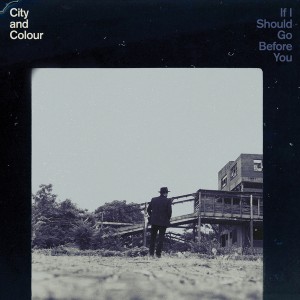 City and Colour
If I Should Go Before You
[Dine Alone]

Dallas Green has had a fascinating career: from post-hardcore beginnings in Alexisonfire, to solo endeavors as folk singer-songwriter City and Colour. His breakout song “The Girl” (that one for his ‘beautiful girl’, with the banjo) was a mark of musical multiplicity. But at the time of recording his latest effort, If I Should Go Before You — post-world tours and massive arena shows — the Toronto native had somewhat of an open plane before him. The result is a City and Colour album entirely unlike its predecessors: masterfully crafted and groovy, laced with overdrive and a post-hardcore aesthetic. Perhaps most influential to the record’s overall flow and content is the fact that Green himself produced it.

The opener and first single, “Woman,” is a near ten-minute traipsing escapade of feedback and aching confessionals. “I will stand beneath the silver moon rising / waiting to resurrect our love” heralds a brand of heartbroken doom that we haven’t really heard thus far from Green. The album’s second track, “Northern Blues,” is rooted in a deep, walking bass line that sounds like it was peeled off the back of a Funkadelic record. The title track is a sleekly introspective look at dependence amongst a loveless departure, equipped with steady rhythm and echoing simplistic guitar.

If I Should Go Before You seems to have been cut from a deeper corner of Dallas Green’s mind — a place that was slowly being tapped into over the past decade, since his work with Alexisonfire. The acoustic troubadour Green once was has become an electric guitar wielding body of emotion. The result is more intense, more driving, more visceral, than previous City and Colour records.