“Hour of the Dawn” by La Sera 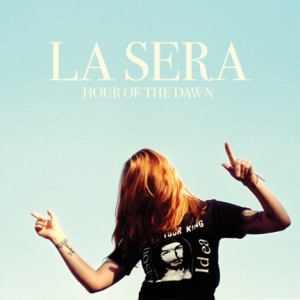 Katy Goodman has never been one to stand still. Known primarily for playing bass in Vivian Girls, she supplemented that band’s output with her own side projects, including (briefly) All Saints Day, and more permanently, La Sera. After the dream pop of the self titled debut, Sees The Light, was the breakthrough, consolidating all her history into one package and stamping it firmly with her own identity. Vivian Girls was laid to rest in February with a series of farewell shows in LA and NY, setting the stage for her next chapter.

Hour Of The Dawn does that one better, transcending the girl garage niche for a turbo charged journey into the light of day. Equally at home with the gritty, “Losing To The Dark”, or dark jangle pop, “Summer Of Love”, it’s all about escape and overcoming the curves life throws you, whether situations, people, or geography. The middle core of the record, the soaring “All My Love Is For You”, the title track, and especially “Kiss This Town Away”, clinch the deal. Things get weird in a good way at the end with “10 Headed Goat Wizard” and the aptly titled “Storm’s End”, a sonic blizzard that underscores the theme as a hard won victory march.