ALBUM REVIEW: "Heroes In The Healing Of The Nation" by Zion I & The Grouch 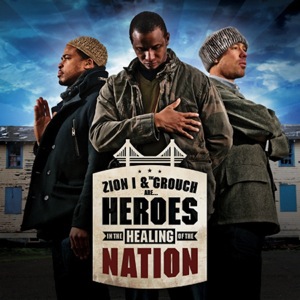 I’m pretty sure I just heard the future of hip-hop. As a fan of the genre, I’ve been quite disappointed with the popular offerings of the last few years. Watching a poetic, soulful musical medium such as hip-hop spiral around the drain, I’ve turned to the underground scene that has filled the void hit-or-miss, but Zion I & The Grouch’s Heroes In The Healing Of The Nation has overfilled the void.

With funky use of guitars, horns, strings, and electronics slathered over a pumping beat (I’m pretty sure my neighbors below me are going to have me evicted), this Bay Area collaboration really puts out something unique. Especially when you listen to the lyrics. “I Used To Be A Vegan” for example, is exactly what it promises, a track about dietary preferences. But the flow is so ill, and the beat so raw and fresh that I can’t get enough of it, and I’m as close to a carnivore as a T-Rex.

I think that might be the real story with these guys. The lyrics promote a better life and living up to your best potential. Track names speak for themselves: “Be A Father To Your Child,” “Leader,” “Victorious People,” I really dig what these guys stand for. But unlike the time Bill Cosby tried it, these guys promote living a great life ALONG with sick-ass beats. I really hope other hip-hop artists take note, Zion I & The Grouch are doing it right.