ALBUM REVIEW: "Happy To You" by Miike Snow 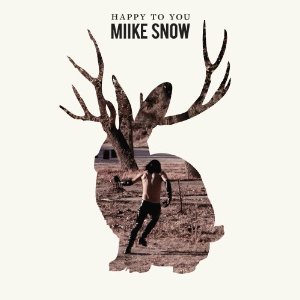 Miike Snow
Happy To You
[Republic]

Electro pop outfit Miike Snow, comprised of producing partners Christian Karlsson and Pontus Winnberg (also known as Bloodshy & Avant), along with front man Andrew Wyatt drops their cialis pills sophomore effort Happy To You tomorrow. Those unfamiliar with their 2009 self-titled debut might have ears fresh enough to really enjoy their latest effort. As for the rest of us, it will most likely be a coin toss.

After the moderate success of their debut LP that resulted in a well-received tour (their live shows being one big dance party), some of us were eager to get our hands on their latest effort. Happy To You sees the trio expanding into a more experimental sound. They gambled hoping to generate something good. “Black Tin Box” started out as delicious oddity, but lost its way shortly after. Not even the lovely Lykke Li could get it back on track again. The gamble pays off on very few tracks. Like the marching band percussion laden “The Wave” and the piano punchy “Devil’s Work” or the whistle laced electro-poppy “Bavarian #1 (Say You Will).”

Most tracks felt like horses you were rooting for, only to be marred by either too much production or nonsensical lyrics. It’s often said that “expectation breeds disappointment,” and unfortunately, it is true of Happy To You.