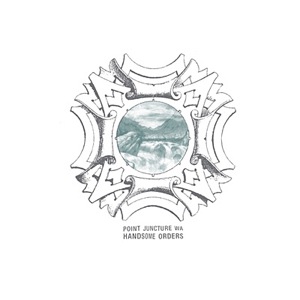 Don’t let the name fool you, Point Juncture, WA actually hail from (where else?) Portland, OR. That said it isn’t really important where they are from, but rather where they are going, and, with the release of Handsome Orders, the band’s general trajectory should be steadily up. Point Juncture, WA is one of those bands who all at once remind you of several different bands and yet have their own distinct sound that makes them hard to compare to anyone else. At times you think they might sound like Band of Horses, but a track later realize that you’re really reminded of some Radiohead-esque weirdness, or maybe a Yo La Tengo inspired groove. Which is not to say they sound like any of these either as Point Juncture, WA infuses their work with lovely harmonies, a wide range of moods and textures, haunting ambient noises and just the right amount of “oomph” in all the right places. They are all at once familiar and yet totally new. The band describes themselves as “Quiet, then real loud, then quiet again,” which sums them up pretty succinctly.