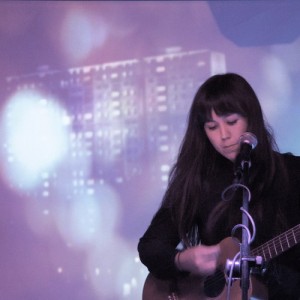 California based trio, Ghost Town Jenny (none of whom are actually called Jenny, by the way), make songs that could be described and sorrow-tinged musical fairytales, surreal acoustic dreams or – more musically accurately – a fusion of gently plucked guitar, cinematic strings and the beautifully unique, hauntingly ethereal voice of one Kim Kylland. This is a singer whose voice has that indefinable quality that bands are built on.

Opening track and single “Suwanee” holds a gentle melancholy, moving string sections accompany Kylland’s otherworldly vocals through lyrics like “distance ain’t no cure for a broken heart,” telling a story of wandering loneliness. “Lights” is maybe the closest to pop danceablity the band come – if you like to dance by swaying your arms outdoors under a full moon and star-spangled sky – and title track ‘Golden Hour” has the atmosphere and orchestral grace of an acoustic Florence and the Machine track. “See You In Eternity” has the open stringed strumming and simplistic lyrical sound of an old country ballad, but with the added benefit of very modern minimalist instrumental arrangements to lift it into the fantastical fairytale world Ghost Town Jenny create between the chords and croonings of their songs.