ALBUM REVIEW: “Gift For The End” by Mariee Sioux 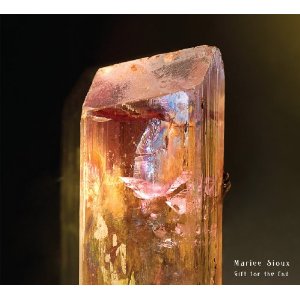 Since her debut album in 2007, Mariee Sioux has inevitably drawn comparisons to Joanna Newsom. Ethereal, avant-garde, and ghostly, Sioux certainly has roots in Newsom’s brand modernist folk. However, her latest release departs somewhat from these origins and proves Sioux to be an original artist and a formidable rising musical force. Fluid, mellow, and frequently haunting, Gift for the End is a stunning blend of evocative natural imagery and hypnotizing cyclical guitar.

With lyrics like, “I can hear you sing the salmon eggs to sleep/the songs of the wild,” it’s no surprise Sioux is based in the Sierra Nevadas. Finding its footing in the valley between psych and native folk, Gift for the End is best suited for a dreamy autumn afternoon in some NorCal wooded meadow. Standout tracks include “Homeopathic” (the album’s eerie six-minute opener) and “Twin Song” (a chilling wistful trill about a bloodsucking twin). Just eight songs and 41 minutes, this album is the offspring of Mazzy Star and Jeff Mangum. Gift for the End may not be the most rousing album of all time, but it oozes with a creeping beauty that’s hard to resist.