ALBUM REVIEW: “Get Buried!” by The Creepy Crawlies 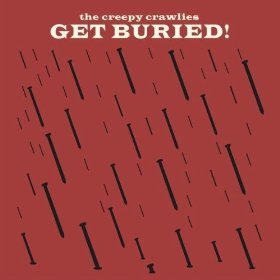 The Creepy Crawlies
Get Buried!
[Unsigned]

With a name like The Creepy Crawlies, we really didn’t expect something as soft and fluffy as the band’s first LP, Get Buried!. Los Angeles/San Francisco shoegaze-garage band, The Creepy Crawlies, is sort of like those candy bugs of yore, creepy crawlers — the first one was ok, the rest turned out legless and parbaked, and then you got bored and left to go watch cartoons. The slow build of the bassline meeting a swooning synth on The Creepy Crawlies’ title track “Get Buried!” perked our ears to a tune offering a charming, poppy answer to the growing number of grittier acts entering the lofi scene. Maybe it’s just the male-female vocal harmonies, but this song has indie young love movie starring Zooey Deschanel and Joseph Gordon Levitt written all over it. Sadly, while the dreamy tunes of quiet guitar melodies and lilting synth organ on the remaining ten tracks are certainly pleasant, they lack any sort of edge to stand out, and things quickly become nap-worthy. The Creepy Crawlies show promise with their title track, but for now, they’ve chosen an unfortunate name of Get Buried!, for an album will probably do just that in our playlists.