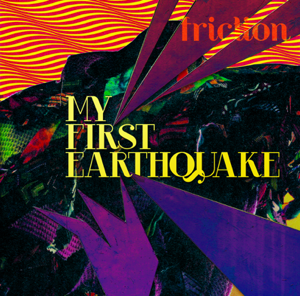 Going to the gym? Psyching yourself up for a marathon? Getting ready to tell someone off? Put that Red Bull away and plug in My First Earthquake’s Friction. It’s all the punch thrust you need.

My First Earthquake is comprised of 4 techies who have impressive personal resumes, from a Google designer to a “semi-famous but totally anonymous music blogger” (the damn tease won’t tell us who he is!) and all in addition to their obvious musical talents.

Friction delivers playful guitar riffs, spunky synths, driving bass lines and solid, feisty vocals. As if that’s not enough, they add comedic lyrics and BAM you’ve got friction! “Nice To See You” is just one of the 10 tracks that showcase clever people appraisals while kicking some ass in the vitality department. “She’s got mud flap girls on the back of her Kia, she makes vroom-vroom sounds and she says that she’ll see ya.”

With the recording of this 4th release being funded by their fans (through Kickstarter in just 3 days), My First Earthquake has really accomplished something special.