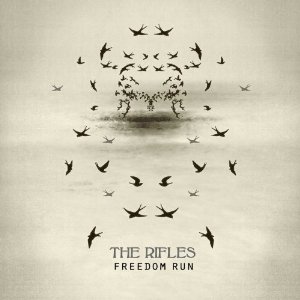 Like many, I boldly wear my Anglophile badge with pride. There was a time when nothing was made privy to these little eardrums unless they had a smart accent, a clever tune, and a band name that begin with the word “The”. The Clash, The Smiths, The Kooks, The Who – you get the idea. Like their musical forefathers before them, London-based quartet The Rifles stand to continue Anglomania with Freedom Run, their third album full of catchy, Brit-pop rock tracks destined to be stuck in your head.

From the moment you hear the first clash of the cymbals on “Dreamer”, it’s like experiencing the exciting start of something new. The band delivers in full on this album with songs like single “Tangled Up In Love” and “Sweetest Thing”, each boasting harmonious guitars and soulful melodies throughout. The country-tinged “Love Is The Key”, a fast, bouncy track, wins points for its use of cowbell. To be perfectly honest, trying to limit oneself to a favorite song is pretty damn near impossible. The entire record keeps your head bopping and creates the feeling like summer’s never left.

Whether it’s the first time you’ve been exposed to the greatness that is The Rifles or you’ve been a fan since their debut in 2006, one thing’s for sure, this talented group of blokes from across the pond will only get bigger and better. God save the Queen!