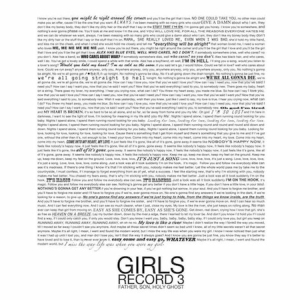 The current pride of SF, Chris Owens and Girls‘ second LP Father, Son, and the Holy Ghost has people raving, and for good reason.  Not only has the band constructed an instant classic that sounds awesome, but Owens’ lyrics and perspective are so damn sad and compelling.

The album starts with “Honey Bunny,” and while the tempo is upbeat and features soulful background singers, his lyrics contrast with “they don’t like my boney body, they don’t like my dirty hair, or the stuff that I say, or the stuff that I’m on.” You want to root for the guy and even pity him a bit, but there’s a cool slyness there as well.  Owens knows what he’s doing, and his vulnerability and honesty are real, but they’re also his tools as an artist.

The first single “Vomit” starts with Owens singing in a whisper, “Nights I spend alone, looking for you baby.”  Ultimately, the song spirals into guitar chaos before being pulled back to the acoustic strings.  The lyrics deal with love and longing, and a line like “come into my heart” would be difficult to pull off and could easily be met with snarky cynicism, but it’s done so well that it feels honest and true.

Check out the video for “Vomit.” It perfectly encapsulates the band, juxtaposing classic imagery of rose petals and a ’64 Mustang, while driving through the grimy streets of SF: