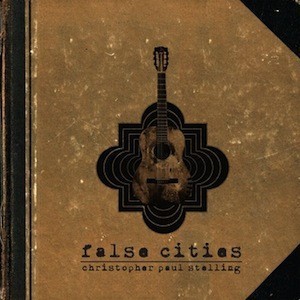 Can an opening track be “too” good? That’s the dilemma that seems to face Brooklyn acoustic-folker, Christopher Paul Stelling, on his second album, False Cities. Opening whirlwind “Brick x Brick” finds Stelling at his most energetic and passionate — leaps and bounds more attention-grabbing than last year’s earnest debut, Songs of Praise and Scorn. “Brick” sets high expectations, but the moody “Who I Am,” and the country-ish “Every Last Extremist” follow up nicely. Many tracks feature a hint of foot-stompin’ percussion, and a splash of fiddle, but the rattlin’-chains-and-stomped-through-grass backbeat on “The Waiting Swamp” serve its lyrics of being on the run well. Stelling’s voice is now a rugged, whiskey-soaked thing, strongly suited to the tales he spins, like the woeful “Free to Go.” “How Long” is pure drama, with his rich guitar chugging along full-steam ahead. He ends with a trio of contemplative tracks, including the touching ode to fatherhood, “Homesick Tributaries,” and the lonesome heartbreaker “Go Your Way Dear.”

The album that starts off like a house on fire never again burns as hotly as it does at the beginning, but it does settle into a nice warm smolder.