“Fade Away” by Best Coast 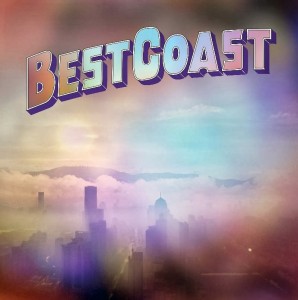 Even before you listen to Fade Away, Best Coast’s new mini-album, you already know all the words. Bethany Cosentino is still waiting by the phone for an imaginary boyfriend (“This Lonely Morning”) just so she can tell him goodbye (“I Wanna Know”). It’s not just the lyrics that are familiar. “I Don’t Know How” employs the same doo-wop to rockabilly tempo change as “I Want To” did three years ago. But what keeps the Southern California duo’s fans hopelessly devoted is the palpable joy and relatable misery that emanates from their lo-fi wall of sound.

Bobb Bruno remains the band’s MVP, wrapping up Cosentino’s powerful pipes and angsty journal entries in bear hugs of surf rock on psych meds arrangements. Producer Wally Gagel weaves in just enough reverb to placate those who bemoaned the lack of fuzz on The Only Place. “Who Have I Become” clocks in at almost five minutes, which for Best Coast is like a rock opera. “Fear Of My Identity” features one of the stronger hooks, “you taught me that my heart will grow old.”

Lovers of last year’s Sad Bethany Show will find it impossible to stop listening to “Baby I’m Crying.” The alt-country ballad is so devastatingly captivating that it convincingly sells a twenty-something singing “my life has come and gone so fast.” The strings are more visible than ever, but Best Coast’s charms have yet to wear off.