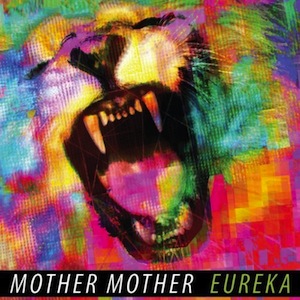 Canadian indie rock quintet Mother Mother drops their third album this month, amidst high anticipation after the success of the bands last record and the departure of backing vocalist Debra-Jean Creelman and addition of singer/keyboardist Jasmin Parkin.

Front man Ryan Guldemond (who wrote all of the song on the record I might add) along with sister Molly Guldemond and Jasmin Parkin’s three part harmonies serve as the main course of each song. The question and answer format of “The Stand” is quirky-pop fun. The band has drawn similarities to Scissor Sisters, due in large part to Ryan’s similar voice pitch with Scissor Sisters front man Jake Shears. “Take me lightly, I’m not the way I ought to be, I’m just the way I’ve got to be” starts off Guldemond on “Simply Simple” is a pop-rock gem. “Getaway” finds Molly taking the vocal lead and we are treated to her lovely angelic voice, akin to the likes of Julia Stone of Angus & Julia Stone fame.

All twelve tracks, while mostly upbeat, contain lyrics that sometimes explore a slightly darker theme, which is decidedly so, Mother Mother. The record is filled with solid pop-rock radio-friendly laden ditties that are sure to invade ear holes and much more likely, radio airwaves everywhere.

The Stand by Mother Mother