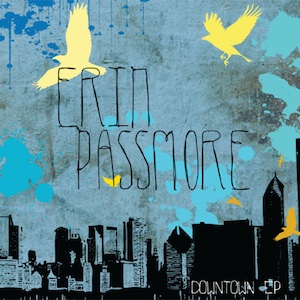 Usually associated with the band Rah Rah, mutli-instrumentalist Erin Passmore has decided to go solo. Her first album, titled Downtown EP, is a step away from Rah Rah’s noisy-pop sound. Erin’s vocals are somewhere between the smoothness of Tracy Chapman and the clarity of Feist. The EP comes off as very honest and real-world sounding, not over-produced or showy. Erin has pared-down the production of the EP so that her voice is the focus. There are few instruments, a horn here, some piano there, but they all serve to enhance her vocals, not take anything away. Also, Erin’s emotions are evident, but not over exaggerated. And although the EP is only eight songs long, there still manages to be a varying voice in the album. An exceptional track is “Rock The Boat,” which falls into the Tracy Chapman side of Erin’s equation. It’s melancholy, but light and airy. The last song, “Captain,” is much more stripped-down, and sounds more like the focused vocals of fellow Canadian, Feist. “Married” is also a great song; it sounds raw, yet optimistic. Overall, the EP is a nice departure for Erin, and a solid work.