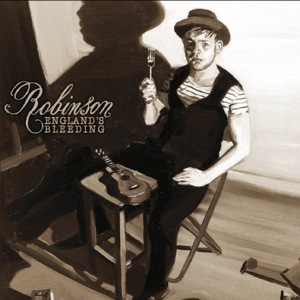 Andy Robinson is a singer-songwriter from England who recently played at SXSW- his latest album, England’s Bleeding is influenced by word master’s Dylan and Waits. The lead single “First Time” is the catchiest of the bunch – yet the core of his album revolves around folk ballads, blues gems, and poetic discourse.

“England’s Bleeding” is a brooding chant in the tradition of communal-political upheaval. “Hip-hip hop hooray for our new Governor. England’s joy is McDonald’s big brother. I don’t care for one or the other…” Pure poetry, and Bukowski-esque.

Robinson’s voice covers it allâ€”the highs, the lows, the rasp, the blues. The tone of his voice is crystal clear on “Dance,” and he hits the high notes in “In a Whisper.” “Sunshine When it Rains” is a hopeful bluesy confession – Americana peaking at its best.

Not to be missed, “Little Miss Darling” is one of the sweetest love stories this side of the Atlantic, “When we get bored elope with me, all the pretty birdies are gonna be our church bells…the snow starts falling, confetti in her hair, let’s hope we’re still smiling in the happy new year.”