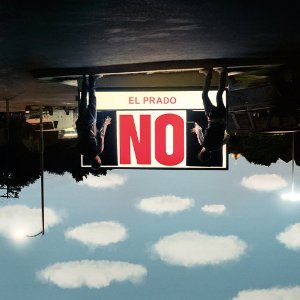 It’s been a long time coming for Echo Park’s NO and the band’s full length debut album. After an eventful winter opening for The Naked & Famous and signing with Toronto-based Arts & Crafts, El Prado follows-up on NO’s self-produced EP, Don’t Worry, You’ll Be Here Forever. Yes, much of Don’t Worry is subsumed in the track list of El Prado, and why not? It served as a perfect representative snapshot of NO and their sound. But El Prado pushes past those first six introductory songs and warmly yet reservedly reveals singer Bradley Hanan Carter‘s world of loneliness. Loneliness doesn’t always connote bleakness, in fact, El Prado does the exact opposite. It inspires hope by finding solidarity in loneliness and giving a voice to experiences we’ve all had at some time or another.

Though tracks like “Stay With Me” and “So Scared” epitomize this dynamic, there are bright bursts interspersed early on with sunny guitar riffs on “Monday” and the group’s collective vocals on “What’s Your Name.” The stand out track comes towards the end of the album with “Hold On” as it punctuates the album’s theme yet propagates an overwhelming feeling of connection through the band’s larger than life vocal performance. The beauty of El Prado lies in its accurate depiction of life – a little desolate at times yet always cautiously optimistic. Watch for NO at Noise Pop in San Francisco and on tour in March and April throughout North America.