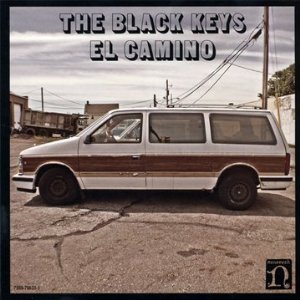 One of the reasons The Black Keys‘ El Camino is about to leave the band’s growing following (as well as many formerly unacquainted rock and roll lovers) completely blown away is because the band loves it as much as they know we will. There is no doubt that this is one of the best rock and roll albums of the year, and arguably topping 2010’s already-excellent Brothers; El Camino is one of the best we’ve seen from Dan Auerbach and Patrick Carney.

It’s not only El Camino’s catchy riffs, compositional creativity, and the battery-charged energy surging through it that makes it an instant classic. Instead, it’s the fact that El Camino is here to highlight the twosome’s innovation and versatility throughout their legendary seven-album legacy for the world to see. And god, are they proud of it. Starting with their early blues sound, The Black Keys have evolved as musicians all the way to the tangible, rock ‘n roll confidence we see oozing from the fuzzy guitar riffs and heart-wrenching vocals present in all eleven tracks that make up the album. And even though the songs are catchier, El Camino reassures us that they’re doing anything but selling out.

With the help of producer Danger Mouse, we still hear Dan Auerbach’s sexy guitar hooks (take the album’s first single “Lonely Boy” for example), and it’s still obvious that the band is just as inspired and talented as ever, but now we are constantly reminded that their rise to the top was no accident. Except for the beautiful acoustic beginning to “Little Black Submarines” and the less hardcore riffs accompanying “Nova Baby,” the eleven tracks share a common, adrenaline-charged energy that manages to keep you more than interested, bobbing your head, and fighting the urge to get up and dance the entire time. Highlights include “Nova Baby,” “Little Black Submarines,” “Lonely Boy,” and “Gold On The Ceiling.” Ladies and gentlemen, our favorite Akron-bred duo is back, and on top.

Check out the video for “Lonely Boy”: