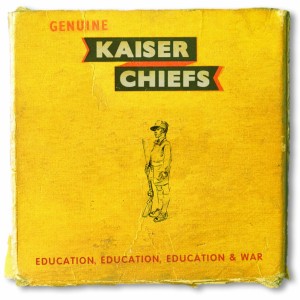 “Misery” is a continuation of the affection that grew from the band’s debut album, Employment. It’s a riot anthem whose lyrics skillfully skewer modern society while allowing Ricky Wilson, the lead singer, the opportunity to laugh maniacally over the persistent drone of the instruments. The song captures the line that the Kaiser Chiefs so often straddle, being a punk band with a message but creating crafty melodies and pop sensibilities.

The band came up around the same time as other Britain indie band notables, Bloc Party, and thus can evoke a certain nostalgia for socially conscious independent rock from abroad. Unlike the melancholic tendencies of their contemporaries, the Kaiser Chiefs have continued to make music that promotes organization and civil action. If other bands are peaceful sit ins, the Kaiser Chiefs are take it to the streets and tear down organization until the image corresponds to utopia. The new album, and a title that reads as a politicians laundry list with the rote mentions of education enough times to sneak in the erstwhile war, is filled with satirizing political anthems. On “Ruffians On Parade” the protagonist easily brings up mention of drones and military marching before mentioning “at the last stand of the day/we lost more than we saved… we spent more than we made.”

“I Predict a Riot” was the first indication of a pop savvy, angry punk band. The influence has carried to their fifth studio album to be released April 1. Ricky is using his voice to persuade a sing along, whether a subconscious attempt to prove the point of his lyrics, or an attempt to mobilize and push a group of otherwise wayward listeners to action.