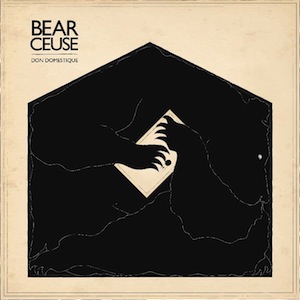 In keeping with time-honored rock tradition, Bear Ceuse’s name makes no sense; “Ceuse” is mecca for rock climbers in southeastern France. The sound of their first full-length, Don Domestique, can fool you for that other band with “Bear” in their name, but these kids have spent much more time digging up dirt in the Malkmus’ and Mangum’s backyard. The band wields distortion as a weapon trained on those who would leave frontman Cameron Matthews second-guessing – and occasionally on himself. The overarching concept is home, but the images are full of spite.

They always let it out somehow – immediately, as on the manic “Zambies,” or on “Streets Of Something Good,” with a final scream after a three and a half minute front of reverbed harmonies and tamed guitars. In either circumstance, Bear Ceuse remain tightly coordinated, never losing their chops even when they lose their cool. No-nonsense songwriting gives Matthews opportunities aplenty to snarl his words, most notably on the agitating but catchy “Dixie Brothers” with harsh leads squealing over loose acoustic strumming. Kicking out the jams while taking potshots at your enemies? That’s called rock with a purpose.