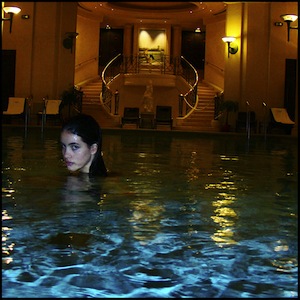 Andrew Wyatt may have even outdone the Beatles in grandiosity. “A Day In The Life” was famously recorded with a 40-piece orchestra, where Miike Snow“s frontman enlisted the entire 75-member Prague Philharmonic for his forthcoming solo debut, Descender. And he sure knows how to use it.

The album begins darkly, deliberately, with “Horse Latitudes” marinating in brooding cellos, but picks up considerately for “Harlem Boyzz.” Its sweet melody is further complemented by violins and a bouncing bass line, though still a far cry from Miike Snow’s frantic electropop. But instead of bending under the weight of the complicated and constantly varying arrangements, all written by Wyatt himself, each song carries its own flavor and distinct mood.

“And Septimus…” shows the full range of Descender within one tune, descending from an enthusiastic falsetto and Beatles-esque fanfare to a whisper and discord. “Cluster Subs,” however, is the most well written song on the album, with brass, woodwinds, and xylophone dancing perfectly into rhythmic and key changes that underline Wyatt’s lyrics. “You can curse my name all you bloody want to,” he sings,

pointedly. Rather, somewhere, George Martin is praising it.