“Danger in the Club” by Palma Violets 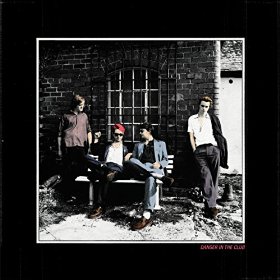 If we had to describe London’s Palma Violets in two words, the description would be as follows: raucously charming. In two short years, touring in support of 2013’s debut album 180, these four young gents have built up quite the reputation for the debauchery that ensues at their live shows. Note: shoving, stomping, lots of sweating, and an accidental foot to the face are not uncommon at a Palma Violets show and we predict the same, if not more, as the band tours for sophomore effort Danger In The Club.

Much like their debut, Danger keeps the mood light, slightly tongue-and-cheek, and doesn’t necessarily capture the energy of the band’s live performance. That’s not a knock on this album by any means, because really, how does one capture raw grit in the studio? Standout tracks include “Gout! Gang! Go!” for its relentless run-on energy; “Coming Over to my Place” for Sam Fryer and Chilli Jesson’s unison shouts/chants of non-commitment (just say no to love, kids); and “Jacket Song” for its surprising brit-pop influence, tenderness, slightly apologetic tone, and attention to fashion detail. Another great album from these raucously charming lads… now when’s their next live show!?