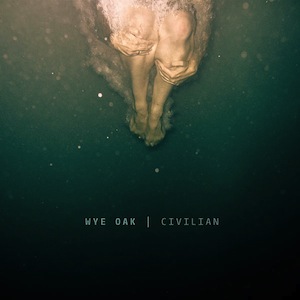 This DC based duo has been around since 2006 making records and touring here and there. After Civilian, if they like, they could tour for as long as they want.

Lead singer/guitarist Jenn Wasner is, cute, yes. She can sing pretty, of course, but Wasner’s emotional euphemisms and hip hairstyles are not meant to fool anyone into thinking that she’s just another pretty face. This chick plays the shit out of the guitar. And her partner, Andy Stack, is a rhythmic/bass playing/whatever else mastermind.

Smart in releasing Civilian (3/7) just weeks before SXSW, it seems they’re not even going (updated – they are). Rather, the duo is out touring Europe and will be back in the states just a few days after its release.

And while the previous Wye Oak albums have been stripped down to imitate their bare bones-like live show, Civilian is an exploration of what’s possible in the studio for these two. Massive layers of guitars and even bigger vocal production yield walls of sound, yet in a live setting, one might wonder how a single guitar player and drummer with a synth could even make a small percentage of this possible.

The album is brilliant, full of Â deep content and fierce melodies, but Wye Oak’s biggest fans’ concern should be – how are they going to pull this off live? Easily one of my favorites so far this year, I don’t see this falling far from the top in the end. And, if they can manage to bridge the gap from spectacular album to breathtaking show, this is one band you cannot miss live in 2011.

Standout tracks: “We Were Wealth,” “Civilian,” and “Two Small Deaths.”