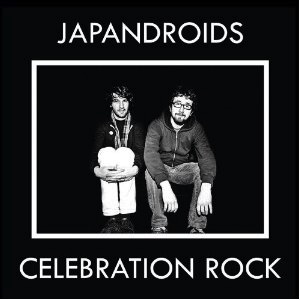 Keenan and Kel, the Bash Brothers via Mighty Ducks 2, and the Tom Sawyer/Huck Finn combo, are notorious for making a swirl of racket albeit being only two people. If you were to give a listen to Celebration Rock by Canadian garage rock ensemble Japandroids, you would quickly award them the cash and prizes for being the loudest duo of all time, surpassing all parties aforementioned.

Celebration Rock is the second full-length release by Brian King and David Prowse. Listening to this album has you guessing how they get away with such a powerful sound without a bass. The answer is pretty simple actually. Prowse has the leg strength of Los Angeles Clipper forward Blake Griffin. On “Fire’s Highway,” the bass drum drills and hammers as King strums the guitar like the royal monarch that his surname proclaims. Japandroids deliver what sounds like an ode to Iggy Pop’s Raw Power on “For the Love of Ivy.” A repetitive riff with the occasional pause that’s lifted up by a shouted couplet, for example: “My hard is broken and I’m going to hell!”

Lastly, a little disclaimer: listening to Celebration Rock may (will) make you joyfully angry and lead you to break things around your house.