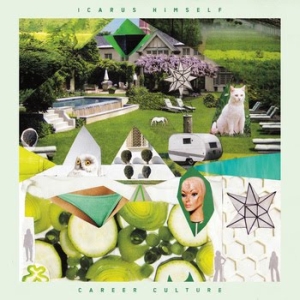 Nick Whetro, lead singer/songwriter for Icarus Himself, seems like a shy guy. His lyrics tend to be introverted, brief, and lament life’s evolution in a most solitary manner. When his voice trembles, it almost sounds painful, but cathartic. Having said that, the group’s second full-length album, Career Culture, is a surprisingly rich and haunting experience that left many of the album’s songs wandering around my head, clamoring for attention.

To me, “On Your Side” has a similar variation on psychedelic rock much like the album that Yellowbirds put out earlier this year. And it’s hard to listen to “Anywhere You Go” and not hear a little Capitol Years‘ muzzled brilliance. Even in its cryptic but beautiful shadows, “In Sept.” is a slow burning, acid pop creation stylized with Elephant 6 recording techniques.

Overall, Career Culture has a lot going for it. Obviously, the content is raw and sometimes chilling, but Icarus Himself is already off to a great start in their brief, but influential career.

Career Culture by Icarus Himself