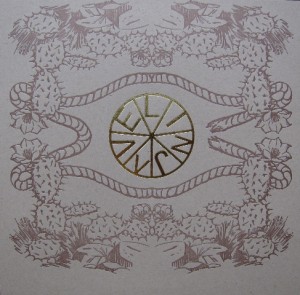 These guys. What can I say? They live in Brooklyn around Prospect Park, play SXSW, eat bee pollen, and make artsy white people movies with their 30-something friends starring someone’s hipster girlfriend. Either they’re living the dream or they’re just irritating. Their latest album Canyon Candy was influenced by roadsigns in the American Southwest and is set to be the soundtrack to another artsy white people movie starring same hipster girlfriend made by same 30-something friend. I’m relieved there’s a purpose to this otherwise repetitious album based on the rather ingenious idea of modern electro western ballads. I mean, doesn’t that sound exciting? Like there should be crazy beats where there were none and awesome loops of guitar, spurs, deep throated cowboys, and lightning? Sure, Javelin hit the western feel right on the nose. Canyon Candy consistently has the clip-cloppy twang one would expect from traditional western music. “Waterfalls” attempts to align with (my) expectations of looped, distorted whistling, and choppy vocal samplings over a modern beat. “Cowpoke” is kinda fun- I would drive around to it on a sunny afternoon and fully enjoy the ambling, hip-hop-ish beat. “Trembler” almost gets there with vocal sampling that begins to build, but is cut short just shy of climax; an attention getter for sure, but I would rather be satisfied thankyouverymuch.

The take home point is the entire album is one big amputation. Beginning with the tracks, every loop they might have constructed and made larger in a modern way is cut short of realizing its potential. The songs themselves are barely over 1:30 on average, and as soon as the listener is accustomed to the direction the track is going, it ends. And finally the album concept- an original, wonderfully nostalgic idea that is rich with possibility, but is taken only to the next step instead of beyond the horizon, which is where it could have gone. Overall, this isn’t easy to listen to without context. I await the movie, where I hope the tracks shine.